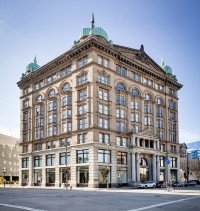 Posted at 20:23h in Finance by Kelly Anderson

Administered by the NPS and the Internal Revenue Service, in partnership with state historic preservation offices, the program provides a 20% federal tax credit to property owners who undertake a substantial rehabilitation of a historic building in a commercial or other income-producing use, while maintaining its historic character.

The historic tax credit has been an important tool to convert older buildings, including abandoned schools and mills, into housing. The report reveals the program rehabilitated 6,994 housing units and created 12,527 units, including 6,152 low- and moderate-income units.

The NPS-funded report by Rutgers University’s Center for Urban Policy Research also reveals that in fiscal 2018:

· The program contributed more than $14.4 billion in output in goods and services to the U.S. economy.

Thirty-five states have their own state historic tax credit program that can be used in tandem with the federal program. Hawaii lawmakers approved a state credit to support the rehabilitation of historic properties earlier this year. In California, a bill to create a historic state credit passed the state Assembly and Senate and was sent to Gov. Gavin Newsom in September.