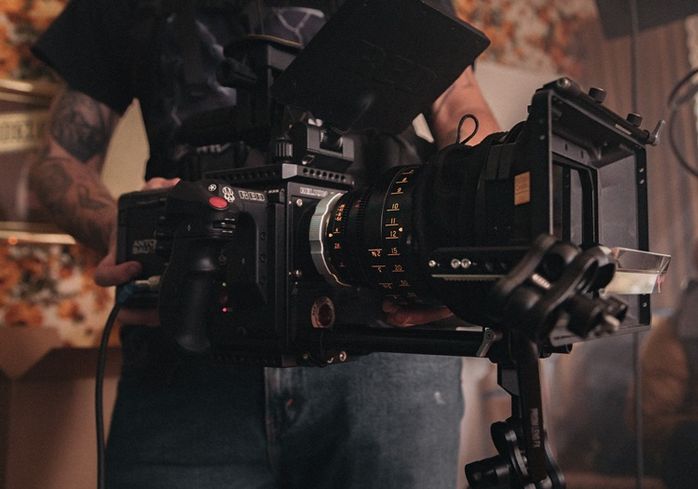 Production houses are starting to ask Georgia studio owners about available space, expecting to ramp up the start of film and TV series that were put on ice during the coronavirus pandemic.

“Everyone is getting calls right now,” Raulet Property Partners partner Tyler Edgarton said. Raulet operates the 85K SF Mailing Avenue facility in Grant Park, and was one of the first developers in Metro Atlanta to build studio space. “Studios are seeing what availability is from July to the end of the year.”

But resuming production has major hurdles to overcome, including the big one: how to make good TV shows and movies during a time of social distancing and face masks. Unsplash/Jakob Owens Film and television unions are hashing out the best ways to produce again during a pandemic.

The widespread shelter-in place orders across the country have created a viewing public hungry for content. Viewers watched 654.6 billion minutes of streaming content between March 23 and April 19, a more than 50% increase over the same period in 2019, Variety reported, citing Nielsen data.

The streaming services have been the biggest beneficiaries, seeing huge spikes in subscribers and viewers.

That has placed pressure on studios to get back to the business of producing more content, especially as some experts believe the quarantine may be creating a paradigm shift in viewing habits away from two-hour bits in movie theaters to streaming on smart TVs and smartphones at home.

“We’ve never seen demand for content this high. If there were 100 Ozarks, then America would maybe enjoy the quarantine more,” Blackhall Studios CEO Ryan Millsap said. “But everyone I know right now is searching for good stuff to watch.”

Many of the big unions that represent the majority of filming talent have been working behind the scenes to come up with standards by which they will agree to staff a production in this post-pandemic world, said Ric Reitz, a former president of the Screen Actors Guild–American Federation of Television and Radio Artists’ Atlanta chapter.

“I know that the studios are eager to get underway,” Reitz said. “Everybody is urgently trying to find that middle ground. They just haven’t found it yet, or they may be close, and I’m not privy to it.”

State officials have also made efforts toward outlining how productions should operate during the pandemic. The Georgia Film Office, a division of the state’s Department of Economic Development, issued guidelines this week on what it describes as best practices approved by the Centers for Disease Control and Prevention and the Georgia Department of Public Health.

Its guidelines include temperature checks for those on set each day, regular use of masks, encouraging casting to be conducted remotely, alternative camera angles to allow for greater distancing between actors and the use of clear barriers. Industry executives also are considering other safety methods, including quarantining crews for the duration of production.

“The constant and open communication with studios and production companies led us to jointly develop some safety ‘best practices’ to help ensure these recommendations are available to anyone considering filming here, while prioritizing the safety of all cast and crew in the state,” Georgia Department of Economic Development Director of Communications Marie Hodge Gordon said in a statement.

“We anticipate that there will also be more detailed, industry-wide labor/management protocol recommendations forthcoming, in addition to these best practices that we developed in conjunction with our studio partners.”

Georgia has become a major production hub, thanks mainly to a lucrative incentive program that gives studios a 20% tax credit for productions of at least $500K and another 10% credit if Georgia’s logo is used during the credits. Those credits are transferable as well, which means studios can sell them to state entities while immediately reaping their benefits.

Millsap founded and runs the nine-studio Blackhall campus off International Park Drive near Hartsfield-Jackson Atlanta International Airport. In 2019, Godzilla: King of the Monsters and Doctor Sleep, both films distributed by Warner Bros., were filmed there.

The state had more than 40 films and television series from a variety of studios in production at the start of the year, including the series MacGyver and Doom Patrol and a Warner Bros. pilot, when the coronavirus started spreading in the U.S. Once the World Health Organization declared it a pandemic, Georgia’s flourishing film industry turned into a ghost town.

Officials with two of the most prolific production companies operating in Georgia, Warner Bros and Netflix, declined to comment about when they expected to resume production. Bisnow Eagle Rock Studios Atlanta, in the northern suburb of Norcross.

Studio heads told Bisnow there has been a smattering of filming taking place in Georgia over the past few weeks, mainly commercials or small productions that can still impose social distancing protocols. But the big productions — Hollywood movies and binge-worthy TV series — requiring hundreds of people in a studio to produce are missing in action.

On Monday, the International Alliance of Theatrical Stage Employees hired a team of epidemiologists to consult with the union on how best to return to production work, the union said in a press release. The Directors Guild of America last month launched a committee to research and come up with best practices. As of a May 8 letter to its membership, the group had yet to create a concrete outline.

“We’re being incredibly diligent in our approach, applying the latest science, and consulting with top medical experts and risk analysts. But as you know from the intricacies of production, there are a lot of complex issues involved, not to mention the fluidity of this situation, and the many unknowns,” DGA President Thomas Schlamme and National Executive Director Russell Hollander wrote in the letter.

“We are working closely with outside experts and other guilds and unions on safety protocols for returning to work,” SAG-AFTRA National Executive Director David White said in an email to Bisnow. “No one yet knows when the industry will be able to restart production, but we intend to be ready at the earliest possible time while ensuring the safety of our members.”

Most white-collar businesses are mulling how best to return to work as states begin lifting restrictions. But as companies enact social distancing measures in offices, shops and restaurants, keeping 6 feet apart, wearing masks and restricting large gatherings are anathema to making good film and TV content.

“The avoidance of germs hasn’t been the focus on any set in the past,” said Anna Singleton, a theatrical agent for Atlanta-based Houghton Talent. The agency has been placing its talent in studio productions in Georgia for 30 years, including the recent production of a new DC Comics TV show, Stargirl.

“[Actors are] all eager to get back to work,” Singleton said. “But everyone has their own feelings of just not sure how to handle it. I think everyone’s waiting for what the process and procedure is going to be.”

That is creating tension in the industry — the desire to get back to work and create new content, while also wanting to avoid endangering everyone on set. And the ultimate question: If someone does get sick, who is ultimately liable, Reitz said. “I always call it, ‘trying to figure out what the rules are and writing them on the sand on a stormy beach,'” he said.

Still, there is hope on the horizon. Many interviewed by Bisnow expect productions to start up again by this summer with an agreement in tow among the various unions. Bisnow obtained an email showing a representative from Disney inquiring about studio space in Metro Atlanta starting in August, and sources said Paramount Network was seeking potential studio space in Georgia for later this year.

“I’ll be shocked if we don’t have productions at Blackhall in June. We’re totally booked in 2021,” Millsap said. “We just have a big advantage because everybody wants to get back to work, and in California, I don’t think they’re even able to get back to work by August.”

In anticipation of productions returning to Georgia, Raulet Partners reopened its prop rental shop this past week, Edgarton said. He expects there to be a surge of productions taking place, not only with new films and television shows but with those that were put on hold during the pandemic.

“There used to be a natural ebb and flow of starts and stops of movies. And now that’s all going to try to restart at a compressed time,” Edgarton said. “It’ll recover, barring flare-ups and stuff. The shows are coming back for the fall. The question is just how that is going to look.”