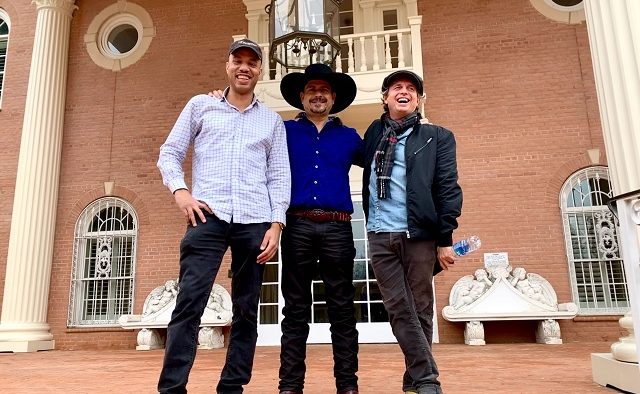 Mark Wilson, Gonzalo Marquez and Michael Thompson are shown near their studio. “Location is everything, and Decatur offers a diverse community, so we are excited to be here,” Marquez said. (Lily Oppenheimer/WABE)

Greater Decatur, GA – Georgia legislators are reconvening in the state Capitol this week after a brief break to iron out the state’s budget.

That could mean lawmakers take up the issue of film tax credits.

Production also brought in billions of dollars of revenue, and the Georgia Department of Economic Development is working to promote more rural parts of the state to filmmakers.

But some are concerned that Georgia is too generous when it comes to wooing the film business and that the selection process is not as stringent as it could be.

And while the “Filmed in Georgia” peach logo shown in movie credits bumps the state’s tax credit from 20% to 30% and saves productions millions, recent audits are questioning how much the credits are actually benefiting Georgians.

Mark Wilson is one person who is relying on those tax credits to help boost his business. He’s one of the owners of a new movie and production studio in town called Aztec Warrior film studios.

Aztec is located in Decatur where Trinity Broadcasting used to be housed. Wilson and other founders — Michael Thompson, a creative director, and Gonzalo Marquez, a real estate investor — joined WABE “Morning Edition” host Lisa Rayam for a tour of the new luxury studio space.

“Location is everything, and Decatur offers a diverse community, so we are excited to be here,” Marquez said.

Thompson thinks the new business venture will be an ideal place to shoot a wider variety of productions and wants Aztec to make its mark in Atlanta — even going up against a long line of studios like Pinewood and Tyler Perry.

“It will be a place for creatives to dream,” Thompson said.

Located at 1550 Agape Way, the studio describes itself as “tucked away on the quiet side of Decatur.”

This story was provided by WABE.